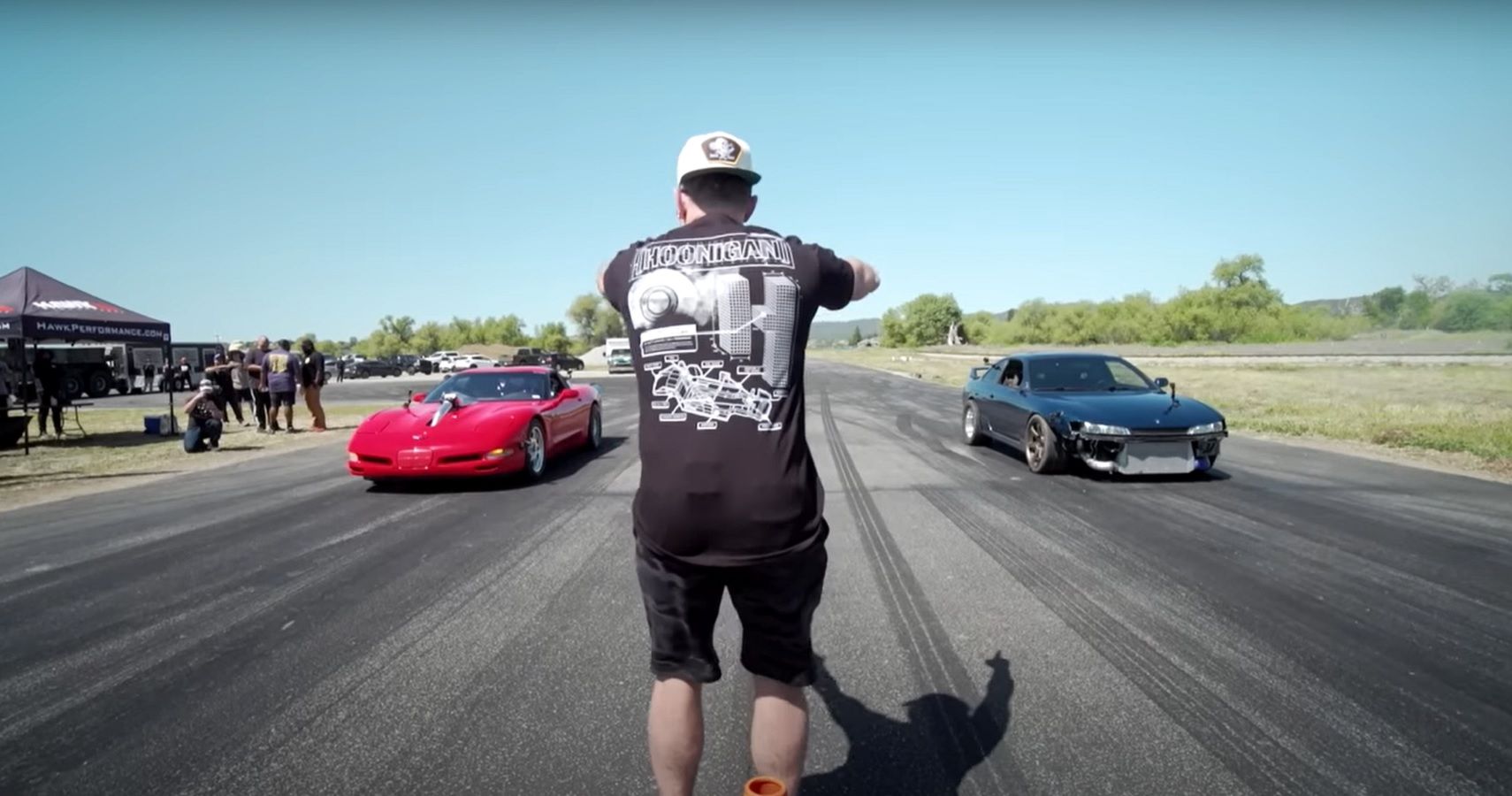 Although the 800-hp Nissan 2JZ 240SX should win on paper, the 550-hp Chevy Corvette was able to pull the power down more efficiently.

The famous YouTube channel Hoonigan brings us another episode of This VS That. The idea is simple. Find two powerful cars and compete against them in drag and roll races. In this episode, it’s “This” C5 Chevy Corvette versus “This” Nissan 240SX. Judging by past episodes, this one will be anything but boring.

RELATED: Watch This Chevrolet C5 Corvette, Nissan 240SX and 2 BMW E36s Cause a Ruckus in Hoonigan

The specifications of the two competing cars

The first car shown to us is the 1999 Corvette C5, which we love for many reasons. The owner claims it produces 550 hp and has a 200 nitrous kick. Power is sent to the wheels via an LS3 manual transmission and six gears. The car weighs 2950 pounds.

Driving the Corvette (otherwise known as Ricky) is Jacob Velamane. He gives us the rundown of the car’s specs as well as the interior which Jacob describes as “pretty typical stuff”. This includes a roll cage, parachute triggers and a nitrous two-step activation button steering wheel.

In the opposite lane is the 1996 Nissan 240SX with a claimed 800 horsepower. This high power comes from a 2JZ-GTE with VVT-1. It’s also a six-speed manual transmission and weighs a little less than the Corvette at 2900 pounds.

Driving the 240 is Basan Khtab, owner of Dynasty Performance in Lodi, California. He tells us he has a twin-turbo system on the car with 35 pounds of boost. On paper, it’s pretty hard to deny that this seems like the clear winner with more power and lighter weight.

The Hoonigan team makes their predictions and the results are 3 against 1 for the Corvette. We arrive at the first race at 11:08 in the video. Once the official’s arms are down signaling the start of the race, the Corvette springs into action leaving the Nissan in its dust.

The Corvette clearly wins the race while the Nissan passes four seconds later. That’s a huge number in the world of drag racing. Race two sees the 240’s ride shake a bit and Jacob backs off for safety reasons. The Nissan takes the win, but the race might have ended differently if the Corvette had gone full throttle.

RELATED: Here’s Why The Chevrolet Corvette C5 Z06 Is Worth Every Penny

Round three shows a 1,000 foot roll race between the two cars. From 50 mph, the 2 cars take off at the mark and the Corvette explodes it. He beats the Nissan by a car length.

Once the racers return, they start discussing the last race and Jacob says he was “all engine on that race. No juice”, which leads one to wonder why the heavier and less powerful Corvette has beat the much more powerful 240SX. With Nissan having better specs on paper, it all depended on the quality of the drivers that day.