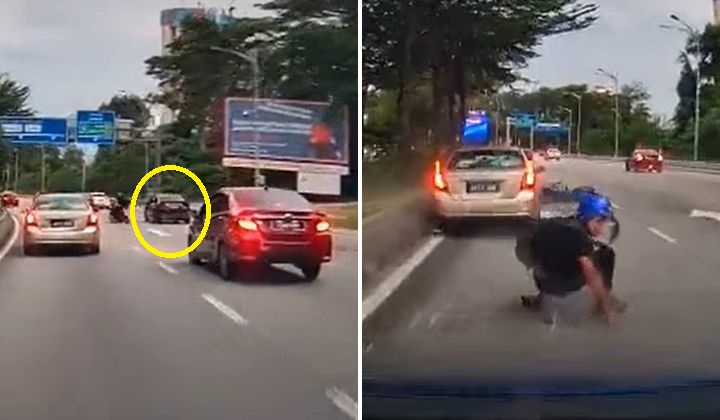 [Watch] Biker narrowly survives being run over 3 times by cars

Subscribe to our new Telegram channel for the latest stories and updates.

A netizen is asking for the public’s help in identifying the driver of a black Honda City that hit his brother on the road and drove away.

In the dashcam video, Dyra Dyrun’s brother, who was riding a motorcycle, was rammed by the black Honda City.

The black Honda City appeared to pull into the next lane without giving a signal and knocked the motorcyclist down.

This caused the driver and vehicle to skid sideways on the road. He narrowly missed being hit by a Chevrolet but was then quickly pinned between the Chevrolet and a blue Perodua Alza.

In another dashcam video, a black Brabus in the mid lane hit the blue Perodua Alza as it tried to avoid hitting a red car in front of it.

The driver of the red car appeared to have stopped in the road to witness the crash involving the motorcyclist.

Fortunately, Dyra’s brother came out alive from the collisions but sustained arm and leg injuries.

Based on the Facebook post, Dyra said they weren’t looking for a witch hunt. They just wanted to find the driver of the Honda City to help make a police report.

Netizens wished his brother a speedy recovery and hoped the driver in question could be quickly identified.

A few of them also advised Dyra to file a hit-and-run police report about it.