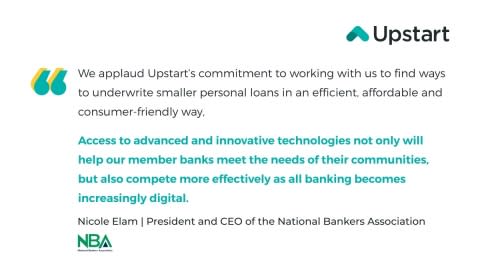 The NBA represents the nation’s MDIs, banks majority owned or operated by people of color, located primarily in communities of color. These minority-owned banks are key to enabling economic mobility in diverse communities by providing access to credit, often when other financial institutions do not.

The partnership with Upstart will provide MDIs with advanced digital lending technology and the ability to economically provide smaller personal loans to their communities. Smaller loan amounts can help borrowers recover from short-term setbacks, without having to pay exorbitant interest rates to payday lenders that can quickly turn into cycles of debt.

“We welcome Upstart’s commitment to working with us to find ways to make smaller personal loans efficient, affordable and user-friendly,” said Nicole Elam, President and CEO of the NBA. “Access to advanced and innovative technologies will not only help our member banks meet the needs of their communities, but also be more competitive as all banking operations become increasingly digital.”

“By providing greater access to credit within low-to-moderate income communities, minority-owned banks in the NBA play a critical role in helping to close the racial wealth gap in America,” said Nat Hoopes, vice president and head of public policy and regulation. Business at Upstart. “We know that access to credit is fundamental to economic mobility and working with Nicole and the NBA Innovation Committee is a unique opportunity to unlock credit where it is often needed most.”

Upstart also offers NBA member banks access to the Upstart referral network. Through the Upstart referral network, individuals come to upstart.com to apply for a personal loan. When a qualified user applies for a loan, they are matched and displayed with a lending partner’s credit offers and seamlessly transition to complete their application and closing process with that lending partner. This will allow MDIs to benefit from the reach of Upstart’s marketing programs to find and serve additional customers.

Optus Bank will be the founding NBA member bank to implement the new program offering personal loans powered by Upstart directly on its banking siteas well as through the Upstart referral network.

“Our mission is to help close the wealth gap and provide credit that may not otherwise be available, but the cost of providing small dollar loans often exceeds any possible return,” said said Dominik Mjartan, president and CEO of Optus Bank, one of the 20 black banks. -owned by American banks and chairman of the NBA’s innovation committee. “Working with Upstart gives us a way to not only offer personal loans more cost-effectively, but also find new customers and introduce them to mission-driven banks.”

The National Bankers Association and Upstart are also member organizations of the Office of the REACh Currency Project Controller and participants in the Minority Depository Institutions (MDI) Task Force which addresses the challenges faced by minority-owned banks in accessing capital, developing technological capabilities and modernizing infrastructure.

About the National Bankers Association

Founded in 1927 as the National Negro Bankers Association, the National Bankers Association today has expanded its membership to include Hispanic American, Asian, Native American, and women-owned banks. Recognized as the voice of minority banks in America, the NBA’s mission is to create an inclusive financial services industry and a vibrant business environment for minority financial institutions, their customers, and the communities they serve. The National Bankers Community Alliance is a 501(c)(3) nonprofit affiliate of the NBA that provides programs and services to support minority depository institutions (MDIs) and the communities they serve. Member banks are located in twenty-two states and the District of Columbia. For more information, visit NationalBankers.org.

Upstart (NASDAQ: UPST) is an artificial intelligence-powered lending platform that partners with banks and credit unions to expand access to affordable credit. By leveraging Upstart’s AI platform, banks and credit unions powered by Upstart can have higher approval rates and lower loss rates, while simultaneously delivering the experience of exceptional digital loan that their customers demand. More than two-thirds of Upstart loans are approved instantly and are fully automated. Upstart was founded by former Googlers in 2012 and is based in San Mateo, Calif., and Columbus, Ohio.

What to do when you can’t pay your property taxes