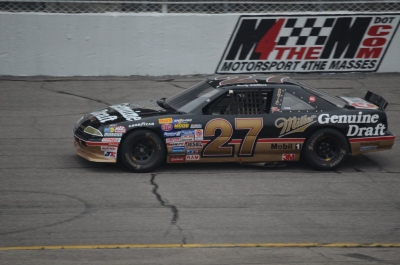 ROCKINGHAM – Several classic production cars will lap around the legendary oval track at Rockingham Speedway this weekend in the first installment of Motorsport 4the Masses’ Classic American Racing Barnstormer series.

On Monday, M4theM owner Rob Bolling said six riders are signed up for the CARBS Thunder Alley 455, though he hopes to add a few more by the end of the week.

When announcing the season schedule, Bolling said CARBS events will include practice laps, qualifying and an exhibition race for what he called “a living historic experience.”

Pete Bruschi, director of marketing and public relations for M4theM, designed the event flyer based on the 1990 AC Delco 200/500 schedule at the track when it was known as North Carolina Motor Speedway.

Both the old program and the new promotion feature Rusty Wallace’s Grand Prix Pontiac Genuine Draft Miller #27 on a yellow triangle with a checkered flag background.

Joe Jackson of Classic Pontiac Rescue, based in Honea Path, South Carolina, will bring a version of this car that was used in the 1990 racing movie “Days of Thunder.”

The car saw some track time at the speedway open house and during the CARBS test and tune-up last month.

The elder Hensley’s career spanned almost 30 years and he won his only pole in 1989 qualifying for Dale Earnhardt – who was unable to do so due to damage from Hurricane Hugo.

Other drivers registered so far include:

The family of the late NASCAR driver JD McDuffie of Sanford will also be at the event.

McDuffie drove for 27 seasons until his death from wreckage in 1991 at Watkins Glen.

McDuffie holds the record for the most Cup starts without a win at 653. He had 106 top 10 finishes, the third being the closest he ever achieved at Albany-Saratoga Speedway in 1971.

Early in his career he raced the dirt track at Rockingham, and according to a 2018 article on brock.lastcar.info, the Rock was McDuffie’s favorite track.

This history states that 42 of McDuffie’s career starts were at Rockingham, the first being at the Peach Blossom 500 – the track’s second race in 1966. In that race, McDuffie started last in a field of 44 cars, finishing 16th.

McDuffie’s best result on the circuit, according to the post, was at the Carolina 500 in 1968 “when he charged from 30th to 7th in a race won by Donnie Allison” – the first of two career wins for McDuffie. Allison at Rockingham.

A mural of McDuffie is set to be unveiled in his hometown of Sanford in September.

There is also a petition for McDuffie to be inducted into the North Carolina Auto Racing Hall of Fame.

With unexpectedly low turnout from drivers, M4theM decided last week to make the event free and open to the public – although donations are accepted.

However, Bolling said he decided to combine the two events on both days, with sports cars and race cars doing hot laps around the oval and the roval.

Spectators will also have the opportunity around lunchtime to do laps around the track, as they did on the open day, as well as tour the garage.

Doors will be open from 8:30 a.m. to 4 p.m. both days. Spectators should enter at Gate D off NC 177. The Zerbini Family Circus will also have performances this weekend.