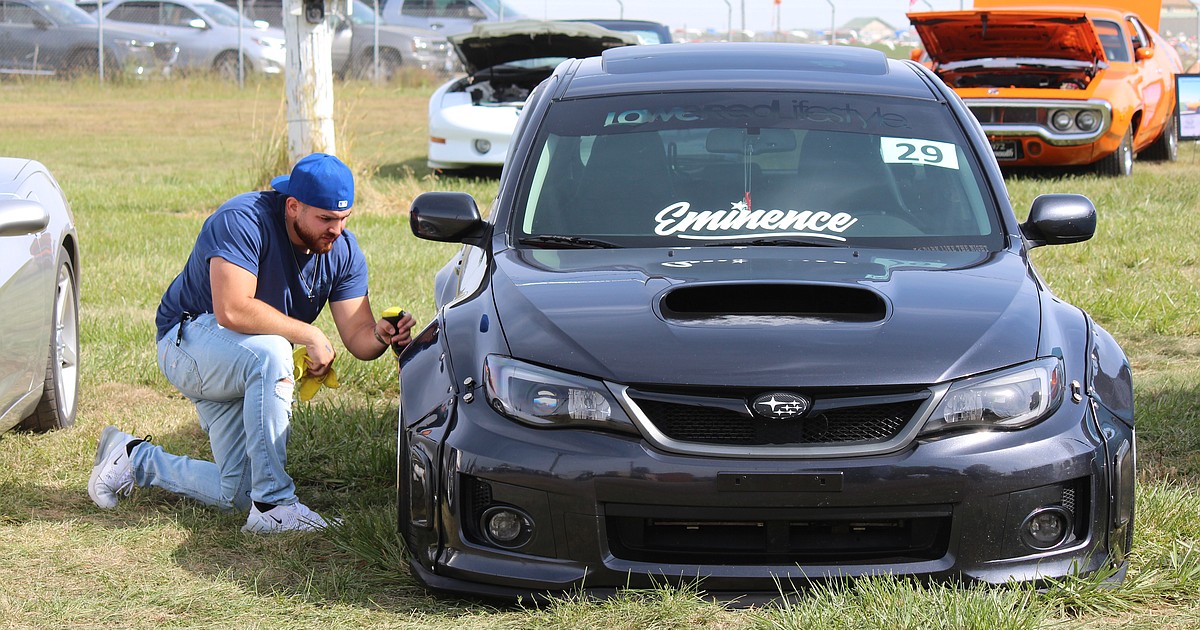 OTHELLO – Johnny Suarez whipped out the spray bottle, polishing his Subaru WRX to a sparkling shine. The Subaru was among the entries for the second annual auto show at the Othello Fair on Saturday, and it’s been a work in progress for some time.

“It’s been my project since high school,” Suarez said. “It’s kind of my first car.”

The car show is a new event, but it attracted a wide variety of fun rides, from 1960s muscle cars to classic 1930s roadsters to modern rides like the Subaru.

The Subaru has changed a lot since it left the factory.

“The whole car can go up and down,” he said.

This has helped him stay busy over the past two years.

“I was building during covid, mostly,” Suarez said.

The Subaru is the car in the garage that is fun to work on; Suarez owns his own tractor-trailer and works as an independent contractor. The truck is also a work in progress.

For now, the Subaru typically comes out on weekends and at events like auto shows, he said — for one thing, it’s not the most fuel-efficient car on the road .

“I barely got it about a month ago, actually,” Medina said. “This is my show car.”

Medina also pulled out the spray bottle on Saturday, keeping everything polished. He has plans for the Corvette, which is pretty much in storage at the moment.

“I really want to have an exhaust,” he said, and there’s engine work to be done.

His everyday car is a truck, partly because the insurance for a man under 25 with a sports car is quite substantial, he said.

Connor Williamson’s 1969 Chevrolet Impala convertible is also a show car, given the price of gas. The Othello Fair motor show was only the third time he’s driven it this year, he said.

The late 1960s saw cars grow to truly impressive lengths, and the Impala was no exception. Williamson’s grandfather, Merritt Johnson, bought the car at auction in the 1990s, he said, and replaced the engine. Williamson said he wanted to replace the exhaust system – when he’s on the road he can barely hear it.

It’s something of a family heirloom. It’s expensive to operate, but it stays in the family.

“I can’t sell it,” Williamson said. “My grandfather would kill me.”

Cheryl Schweizer can be reached at cschweizer@columbiabasinherald.com.