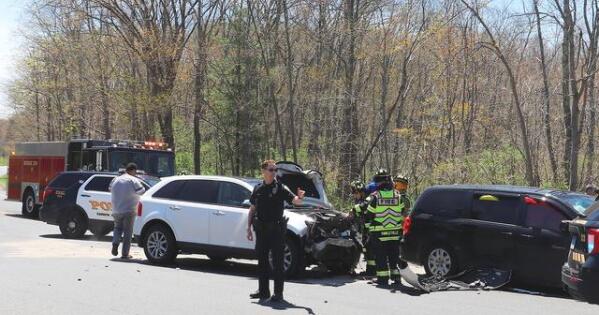 Collision on the way

Newtown police report Jessica Gandy, 34, of Naugatuck, who operates a 1999 Buick Century Custom, was heading south on Hawleyville Road at 8:57 a.m. on April 29. Gandy was traveling behind a 2022 Mitsubishi Outlander operated by Bruce Novicky, 36, of Bethel. Police said Gandy attempted to pass Novicky on the left into the northbound traffic lane as Novicky attempted to turn left on the dirt bend opposite Covered Bridge Road. The left front bumper of Novicky’s vehicle struck the right front fender of Gandy’s vehicle in the process.

Newtown Police report Andre Douaihy, 27, of Brookfield, operating a 2017 Audi A3, was heading south on Dodgingtown Road north of Karen Boulevard at 11:35 a.m. on May 1. Douaihy said a deer came from a wooded area off the northbound shoulder of the roadway and crossed the road, hitting the front left corner of Douaihy’s vehicle.

The deer was in the center of the road nearby, where it had expired.

The vehicle was towed due to damage.

No enforcement action was taken.

Newtown police report a set of keys from a 2009 Toyota Camry was found May 2 near the Fairfield Hills baseball diamond. Reference case number 22-5091 to Newtown Police Department to retrieve.

Side sweep on South Main

Newtown Police Report Lexie Codespoti, 42, of Newtown, operating a 2013 Honda CR-V, was traveling north on South Main Street at 3:56 p.m. on May 5. Annette Barbour, 63, of Newtown, operating a 2012 Jeep Grand Cherokee, was heading south on South Main Street. According to police, Codespoti’s vehicle crossed the center line into the southbound lane and the left side of his vehicle swept over the left side of Barbour’s vehicle.

Codespoti received a written warning for not staying on track.

Failure to grant right of way

Both vehicles were towed. No injuries were reported.

Biekert was given a violation for failing to grant the right of way to oncoming traffic.

Newtown Police Report Moya Bahadosingh, 51, of Trumbull, driving a Mercedes GLC (year not identified in report), was traveling south on Main Street at 6:33 p.m. on May 6. James Carr, 62, of Groton, driving a 2011 Chevrolet Camaro, went straight from Church Hill Road to West Street. Police said Bahadosingh passed a line of traffic stopped in the flagpole area at the intersection of Main Street, Church Hill Road and West Street. While passing, Bahadosingh’s vehicle struck Carr’s vehicle outside the travel lane, in the area around the mast.

Bahadosingh received a violation for overtaking on the right.

Newtown police report Nancy Delgado-Chavez, 39, of Danbury, who was driving a 2003 Honda Accord, was heading south on Main Street at 5:03 a.m. on May 7. Delgado-Chavez’s vehicle slid on the wet pavement and crossed the boundary lines. into the northbound lane, where it turned 180 degrees and re-entered the southbound lane before leaving the roadway on the right and hitting two trees.

Delgado-Chavez was taken to hospital in Danbury for possible injuries. The vehicle was towed due to disabling damage.

Delgado-Chavez received a verbal warning for traveling too fast for the conditions.

Newtown Police report Chanette Rosa, 44, of Bridgeport, operating a 2009 Toyota Corolla, was traveling south on South Main Street at 5:05 p.m. on May 9. Charles Eppers, 21, of Sandy Hook, operating a 2018 Mazda CX-5, was heading south on South Main Street past Rosa and stopped for traffic to wait for a left turn. The front bumper of Rosa’s vehicle struck the rear bumper of Eppers’ vehicle.

No injuries were reported. Rosa’s vehicle was towed.

Rosa received a verbal warning for following too closely, which resulted in an accident.

A Newtown police officer directs traffic on Hawleyville Road near the intersection of this road with Obtuse and Currituck roads at around 11:30 a.m. on Monday, May 9, following a two-vehicle accident. Behind him, personnel from the Hawleyville Volunteer Fire Company and Newtown Volunteer Ambulance Corps check the drivers of the Ford Edge and Dodge Grand Caravan that have collided. Neither driver went to the hospital from the scene of the accident. Both vehicles were heavily damaged and were towed. Traffic was guided through the intersection for nearly an hour while first responders were on scene. Additional details were not available before this week’s deadlines. —Bee Photo, Hicks