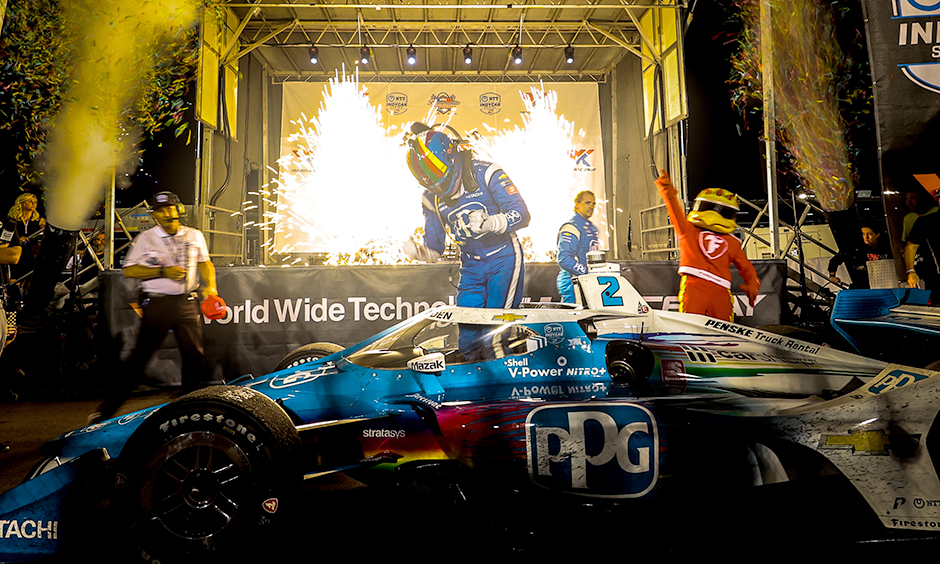 Josef Newgarden won the rain-interrupted Bommarito Automotive Group 500 presented by Axalta and Valvoline on Saturday night at World Wide Technology Raceway, mastering the race in the race created by the weather delay and moving even closer to the lead in the NTT INDYCAR SERIES championship .

Newgarden, of Nashville, Tennessee, earned his series-leading fifth win of the season at the No. 2 PPG Penske Chevrolet team by 0.4708 seconds over rookie David Malukas, whose spirited charge after the restart of the race fell just short in the #18 Honda HMD, but still had a career-best result. It was also Newgarden’s third straight win at the 1.25-mile oval in the shadow of the Gateway Arch.

“I was so happy that we were able to finish this race,” Newgarden said. “Scott McLaughlin, he wanted to win too. I like that about us. We have a good relationship. He drove me super right there at the end.

Two-time series champion Newgarden found himself within three points of teammate and series leader Will Power in the race for the Astor Challenge Cup with just two races remaining. NTT P1 award winner Power led a race-high 128 laps but finished sixth in the No. 12 Verizon Team Penske Chevrolet.

Scott McLaughlin finished third in the No. 3 Penske Chevrolet Odyssey Battery Team despite leading the restart with 37 laps to go after a two-hour, nine-minute red flag due to rain and lightning.

Pato O’Ward finished fourth in the No. 5 Chevrolet Arrow McLaren SP, while two-time Indianapolis 500 winner Takuma Sato was fifth for his best result this season in the No. 51 Honda Nurtec ODT.

The championship race remains tight and tense. Seven drivers are still mathematically eligible to win the title, with just 58 points – just four more than the maximum awarded in a race – separating leader Power from seventh-placed O’Ward.

The official distance for this race was 260 laps, but the rain delay almost made it feel like a 213-lap race in broad daylight followed by a 47-lap trophy under the lights.

When the race resumed at 9:05 p.m. local time, the track conditions had changed significantly as the rain had cleared the asphalt and there was better grip due to the lower temperatures after sunset.

The starting field cautiously returned to the track after the red flag was raised, and McLaughlin pulled away when the green flag flew on lap 224. But Newgarden wasted no time slipping under the box of McLaughlin gears up from the back right away and dove under his teammate into Turn 3 on lap 225, the first full lap after the restart, to take the lead for good.

“We just had to have a good start,” Newgarden said. “I knew Scott was going to be good at the end there, and he had a great restart. I just tried to work the high way. The high way worked earlier for me. We had just enough to run over him. He was no exception this weekend.

McLaughlin stayed about six-tenths of a second behind his teammate for the next 34 laps, but couldn’t find a way out. Meanwhile, Malukas put the exclamation mark on the most exciting drive of his young career to go from fifth at the restart to second at the finish.

Malukas, a Chicago-area native, made it to third by passing O’Ward on lap 245, then set his sights on Newgarden and McLaughlin.

“We ended up going around O’Ward and we ended up passing a run-in car, and they (pit box) said, ‘You see them out front,’ and I saw two Penskes, and I was like, ‘ Oh, my God, those are Penskes! They were tough.

Although he never challenged Newgarden, Malukas passed McLaughlin for second on the final lap with a brave and full outward move into Turn 1, aided by the added traction of cooler temperatures and a clean race track. .

Malukas’ previous best result before this emotional result was eighth last month in the second race of the doubles at the Iowa Speedway oval.

The teams attempted various pit strategies in the second half of the race to try and get ahead when the expected rain arrived, securing an unlikely victory if the race did not resume. Malukas and Sato were on an alternate strategy which pushed Malukas into the lead on laps 207-211, but he was forced to stop. The rain came two laps later.

It appeared that pit strategy and traffic may have thwarted Newgarden just before the rain arrived.

McLaughlin dropped from second on lap 207. Newgarden stopped a lap later from the lead but followed rookie Christian Lundgaard in the #30 Mi-Jack Honda into the pits, Newgarden’s pit on the lap recording 1.065 seconds less than McLaughlin’s. McLaughlin kept the lead when Newgarden returned to the circuit after his stoppage, holding the lead until the red flag.