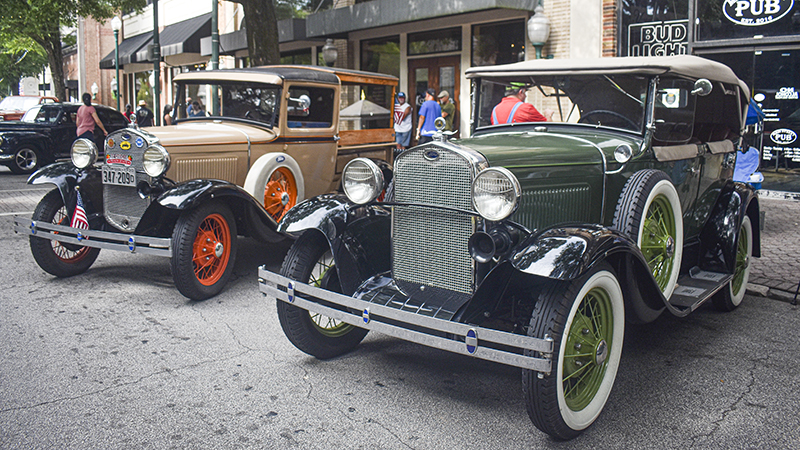 As the automobile industry began to take root in the early part of 20th century America, Troup County, like many small communities, was slow to accept this new invention of the time. However, Troup County eventually began trading the horse and buggy for Model-Ts and other automobiles that became available in the area.

The history of Troup County’s love/hate relationship with cars is documented in the Legacy Museum on Main’s newest exhibit: Hit the Road – Walk Through Local Automotive History. This exhibit, which spans the majority of the museum’s first floor exhibit area, presents a view of automotive history nationally and in Troup County, including and some of the oldest automobile establishments in the region.

According to information from the exhibit, documented by Troup County Archives, LaGrange’s first automobile dealership was the LaGrange Automobile Company, established circa 1907 on Broad Street. The company offered a then-popular service called “cars for rent”, which allowed citizens to hire a driver to drive them around town.

Bill Johnson Motors was another icon of local car dealerships. The car dealership is believed to be LaGrange’s oldest operating dealership, according to the exhibit. Today they are located on Commerce Avenue. Lukken Chevrolet was also a prominent dealership on Main Street in 1965. The dealership moved to New Franklin Road in 1966 where it continues to operate today.

The introduction of these dealerships also gave way to gas stations where workers cleaned and filled a customer’s car. The exhibit pays particular attention to Woody’s Service Center, operated by the Woody family, which managed to survive most of the changing industry for 50 years before closing its doors for good in 2019.

Although the auto industry has offered exciting new changes and economic benefits locally, it has also created notable damage in its wake. Car accidents were extremely common when the automobile was introduced. A universal problem involved the cohabitation of carriages and horses, which would easily become spooked by the noisy engines of earlier models. Local items displayed in the exhibit feature some of the most notable accidents to occur in the area, including the first bumpers on Whitesville Road in the 1930s and even the death of a Lanett man on I-85 and the deaths of two motorists in Hogansville in the early 1900s. With these tragedies also came solutions. For example, Hogansville got its first traffic light on Main Street and Highway 29 to mitigate “traffic hazards” caused by new traffic.

Today, Troup County is home to several prominent automotive distributors, including KIA Georgia, which opened in West Point in 2009, Toyota and Honda.

Shannon Johnson, executive director of the Troup County Archives, also noted that it is currently unknown who owned the first car in Troup County.

Hit the Road – Go Through Local Automotive History. will be on display at the Legacy Museum on Main until June 2023.