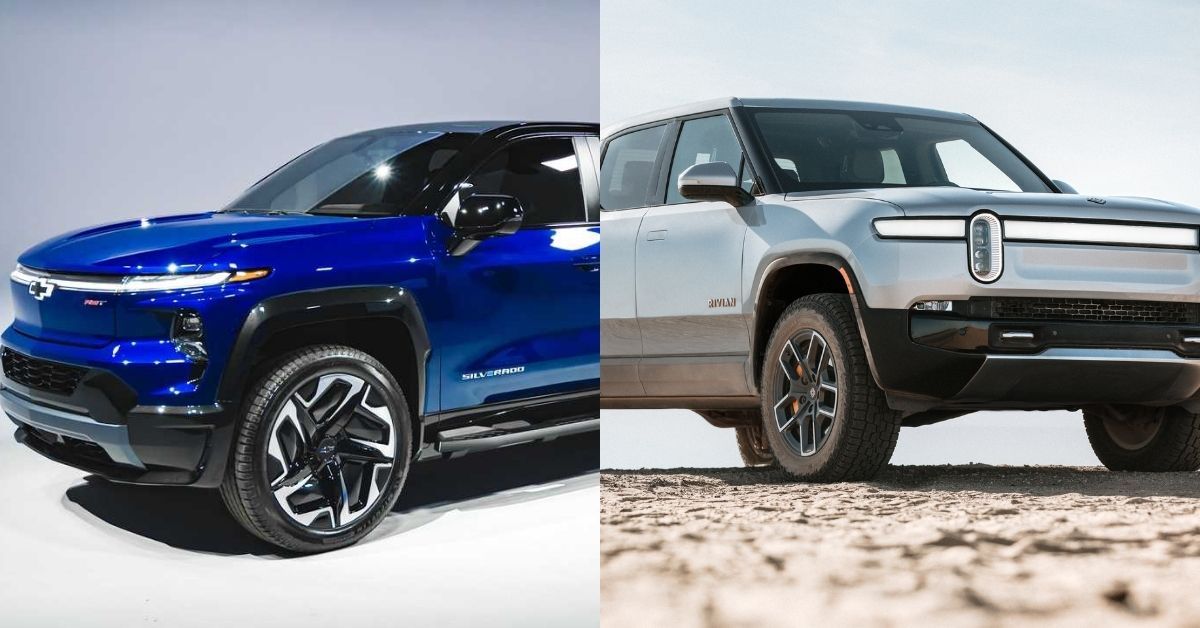 The Rivian R1T has the most intuitive storage spaces we’ve ever seen in a van. With a short bed that can be extended using a gooseneck tailgate system that allows the tailgate to open 180°, increasing the length of the bed up to 55.1 inches. The Chevrolet Silverado EV is a bigger pickup truck, but the official specs aren’t known yet, so we can’t conclude which truck will have better storage spaces and therefore more practicality.

The Chevrolet Silverado EV is a crew cab truck with a mid-size bed, unlike the Rivian R1T, which is a bit smaller than a full-size truck like the F150 Lightning but bigger than a mid-size truck. However, comparing the sizes, the Chevrolet Silverado is a bit larger than the Rivian R1T in terms of length, but the two trucks are quite similar in height and width. So if size matters to you, there really isn’t a difference between the two.

Now the Rivian R1T has been acclaimed for its four-motor configuration with separate electric motors for all wheels, the Chevrolet Silverado has dual electric motors although both trucks have all-wheel drive. The Rivian R1T is the first truck from the new electric startup and features an all-new design and architecture for the entire truck. The Chevrolet Silverado, meanwhile, uses a purpose-built Ultium battery vehicle platform, which it shares with GMC’s Hummer EV.

Related: Everything you need to know before ordering a Rivian R1T

The main selling point around the R1T is its incredible performance in both urban and off-road conditions. Now, GM is claiming impressive numbers around the Silverado EV, but against the R1T’s four-motor setup, it’s not hard to imagine the winner here. The Rivian R1T produces 835 hp and a peak torque of 908 lb-ft, with an impressive 0-60 time of 3 seconds. GM says the Silverado EV will have a maximum power of 664 hp and a maximum torque of 780 lb-ft. The Silverado EV will have a 0-60 time of just over 4.5 seconds thanks to its Wide Open Watts (WOW) launch control system.

GM claims the Silverado EV will have a range of over 400 miles, which is far more than the Rivian R1T’s claimed 314-mile range with the “large” battery. However, a larger battery version is expected to be announced in 2023 with an increased range of 400 miles. GM also says the Silverado EV will support DC fast charging, which will give users a range of 100 miles on 10 minutes of charging. The Rivian R1T claims a charging speed of 140 miles of range in 20 minutes with its fast charger, which tops out at 210kW. The Silverado EV should support up to 350 kW of fast charging.

Related: How the Silverado EV Compares to the Tesla Cybertruck

The Chevrolet Silverado EV has a maximum payload capacity of 1,300 lbs, which is well below the Rivian R1T’s maximum payload capacity of 1,760 lbs. The Rivian R1T also takes the lead in towing capacity at 11,000 lbs compared to the Silverado EV’s 10,000 lbs towing capacity. Since both of these trucks are electric, they use the front trunk (or frunk) for easily accessible and closed storage. Rivian R1T’s trunk has a capacity of 11 cubic feet, which is enough to keep a few bags for better security than the bed. GM has yet to reveal details of its “e-trunk,” but following Silverado’s modular storage theme, we can expect the frunk capacity to be similar to that of the Rivian R1T.

Related: Why the 2024 Chevrolet Silverado EV Is Now the Coolest Electric Truck

Both of these trucks are highly anticipated and will be a springboard for the relatively new electric pickup segment. Both pickups are comparable with the Rivian R1T having a more futuristic and GM theme featuring a conventional design with some modern elements. The Rivian R1T is not for the common man with a starting price of $67,500 for the base version and the Launch and Adventure editions starting at $73,000. GM announced that the price of the Silverado EV would be reduced to around $40,000.

Both pickups have great design and specs, but since there are no actual specs on the Silverado EV, unlike the R1T which received critical acclaim due to its amazing real-world user experience. We can say GM will make sure the Silverado EV is a tough competitor to the R1T, and it’s a win-win situation for consumers.

Here’s how much the new electric pickup costs and when buyers can get one.