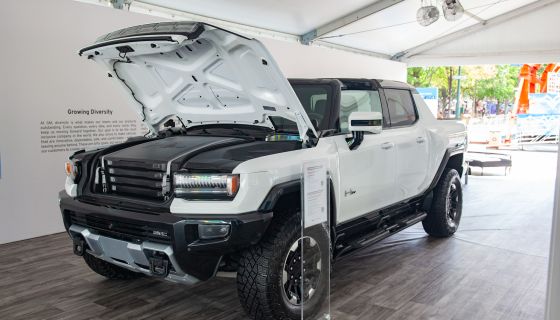 General Motors (GMC, Buick, Cadillac and Chevrolet) takes building a safe and sustainable future seriously and has pledged to sell only electric vehicles by 2035 in a bold move that has represented a seismic shift in automobile industry.

A $35 billion initiative, the storied company has moved to the forefront of electrification, sustainability and accessibility, prominently featured in its immersive activations at the “Made In America” ​​festival in Philadelphia.

“General Motors and the Made in America Festival are at the intersection of technology, music and culture,” said Tarshena ArmstrongMarketing and Diversity Development Director.

“This is an opportunity for us to represent the unrepresented community by sharing our future of being the most inclusive company in the world, our all-electric future and our triple zero commitment of zero accidents, zero emissions and zero congestion.”

With the most culturally diverse festival as a backdrop, GM showcased its new 2023 HUMMER EV – a revolutionary all-electric supertruck – and its Ultium battery (with an estimated range of 329 miles) while advancing its zero commitment accident, zero emissions and zero congestion.

Impressively progressive, GM has thrived at the intersection of electric vehicles, technology, music and art with its elevator Ultium Lounge featuring a wall of moss greenery, flowing D’USSE cocktails and a breathtaking view of the main stage (where we watched bad bunny make seas of people swing their hips uncontrollably).

In the heart of Benjamin Franklin Parkway, festival-goers could explore the new 2023 HUMMER EV, create custom buttons, charge their phone, enjoy a Ferris wheel and view stunning hood artwork by talented artists from all over in the country.

Recently, GM partnered with Secret Walls and four amazing artists who painted their hood on a hood for charity as part of the super cool Neighbor Hoods campaign.

Overall, “Made In America” ​​the GM Way was an incredible experience and another win for a company that understands diversity, creative boldness and hospitality.