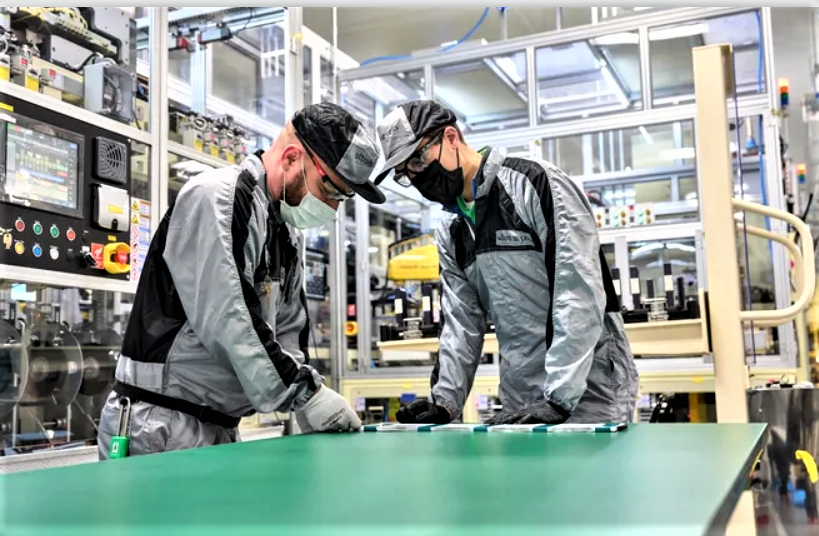 The UAW is seeking to organize the 900 workers at the new Ultium Cells battery plant in Lordstown, OH, which is crucial to the future of the union and General Motors.

The $2.3 billion plant in northeast Ohio is a central part of GM’s battery electric vehicle offensive. But that plan is likely to fall behind schedule as the automaker can’t get enough batteries to power its growing fleet of BEVs using Ultium cells – including the GMC Hummer, Cadillac Lyriq (picture below) and soon the Chevrolet Silverado EV and Chevrolet Equinox EV.

The majority of Ultium workers have signed cards authorizing the UAW to represent them, union president Ray Curry said. The UAW filed a petition with the Cleveland office of the National Labor Relations Board calling for an election establishing the union as the workers’ bargaining agent.

“By refusing to recognize their majority will, Ultium – which is a joint venture between General Motors and LG Energy Solution – has decided to ignore democracy and delay the recognition process,” Curry said in a statement. “Make no mistake: Whether it’s card check or union election, these workers will be members of the UAW.

According to the UAW, Ultium previously indicated a willingness to recognize the majority will of workers based on permission cards, but has now backtracked.

“Ultium Cells will comply with the National Labor Relations Act, which protects the right of our employees to decide freely about unionization through a voluntary election conducted by the NLRB. Ultium Cells believes that the right to a personal and private vote is important.

John Russo, a visiting scholar at Georgetown University’s Kalmanovitz Initiative for Work and the Working Poor, who has also taught at Youngstown University, 12 miles southeast of Lordstown, says more than 90 % of workers have signed authorization cards.

Ultium Cells rejected the UAW’s request for voluntary recognition and said it would prefer a recognition election. So far, there’s been no indication that Ultium Cells and its management team, which includes several former GM employees, are preparing to wage an anti-UAW campaign at the plant, Russo said.

However, the UAW says the tussle over representation at Ultium Cells has been going on for months. Production at the Lordstown plant (picture below) started at the end of August.

The company has participated in meetings and discussions with the UAW on a process to certify UAW majority status without going through an NLRB election, according to the union.

“Although the UAW engaged in good faith discussions, it is now clear that the company’s strategy was to delay and deny union representation for workers for as long as possible,” says Wayne Blanchard, area manager 2B. “The UAW has filed the petition (with the NLRB) so that the workers can continue to form their union without further delay.”

Added George Goranitis, an Ultium employee supporting the UAW, “We hoped that Ultium would have done the right thing so that we could continue to negotiate and resolve the serious health and safety issues at the plant.

“This decision by Ultium reminds all of us why we need to form our union, because the company does not care about our interests. We are ready to win our elections,” Goranitis said.

In 2017, anti-union campaigns derailed high-profile UAW organizing campaigns at Fuyao Glass America in Moraine in southwestern Ohio – which was the subject of an Oscar-winning documentary, American Factory – and at the assembly plant in Canton, MS, where consultants successfully exploited a high-level UAW corruption scandal to thwart union efforts. In both cases, union organizers estimated, based on card checks, that a majority of workers supported UAW membership.

The UAW’s organizing efforts at the Tesla factory in Fremont, Calif., have been stymied by legal challenges from the company. The case is pending in a federal appeals court in New Orleans.

With the effects of the corruption scandal still over its head, the UAW — operating under the supervision of a court-appointed comptroller — focused on organizing workers in small factories.

All parties have a substantial stake in the outcome of the Ultium cell vote in northeast Ohio, which has long been considered one of the strongholds of organized labor in the United States.

In a conference call with investors, GM CEO Mary Barra admitted that the automaker will miss its previously announced BEV production targets by at least six months. GM had said it planned to build 400,000 BEV units by the end of 2023 as it ramps up production at the Lordstown plant, which is built on part of the site once occupied by assembly plants and GM stamping.

The Lordstown, GM assembly plant, which closed in 2019 over UAW objections, is now occupied by BEV maker Lordstown Motors, which has its own challenges in ramping up production.

GM’s JV partner, LG Energy Solution, is also involved in building other battery plants, including at least two others with GM in Lansing, MI, and Spring Hill, TN.

Organizing battery plants is a priority for the UAW, as employment at conventional engine and transmission plants is expected to decline sharply as the industry shifts to BEVs, according to internal union studies.