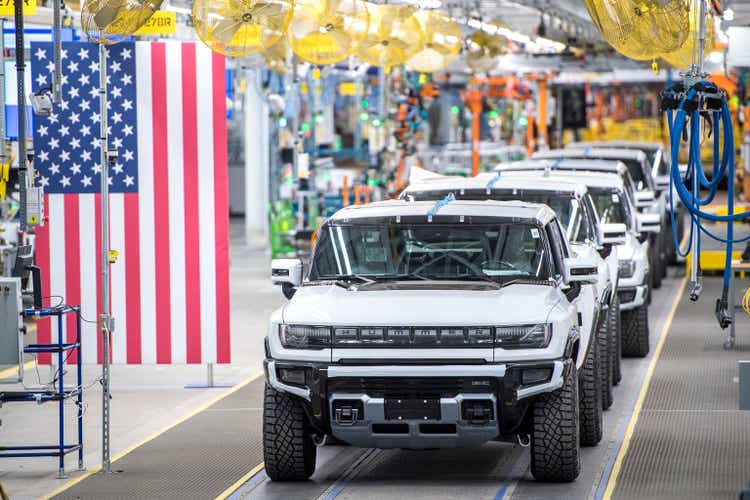 Like Mary Barra, General Motors Co. (NYSE: GM) chairman, expressed with exquisite understatement during the second quarter earnings call with analysts on July 26: “It’s a truly unique and dynamic market that presents both challenges and opportunities for GM.

GM has built about 90,000 vehicles — likely worth more than $4 billion — that can’t yet be shipped to dealerships because one or more parts (often, semiconductor chips) are missing. GM dealerships, meanwhile, only have a ten to twenty day supply of vehicles, probably a third of what they need to meet consumer demand.

In such an environment, GM and dealerships are able to sell vehicles at full margins, generating strong profitability. But the total cash generated is down sharply – and that cash is needed to pay rising bills from battery electric vehicle (BEV) related investments such as the new Ultium Cells LLC plant in Lordstown, Ohio, which will supply the plant. assembly plant in Detroit that builds the new GMC Hummer EV. Between 2020 and 2025, GM is targeting $35 billion in capital, engineering and development costs for new technologies, including BEVs, autonomous vehicles and hydrogen fuel cells.

The outlook for robust BEV sales looks positive, on the one hand, with more than 80,000 “reservations” for Hummer pickup and SUV models; 150,000 reservations for Silverado EV in 2023 and other BEV models such as Cadillac Lyriq, Chevrolet Blazer EV and Chevrolet Equinox EV through 2023. Production of BrightDrop Zevo commercial vans is expected to begin later this year at GM Canada and Cruise Pilot commercial payment for robotaxis in San Fransisco.

In the meantime, GM is taking on debt to shore up its finances, ostensibly to cover a dip in cash caused by short-term shortages of salable vehicles to ship to dealerships. A $2.5 billion Department of Energy loan to the GM joint venture building the Ohio plant — as well as future plants in Tennessee and Michigan — will come from the Advanced Technology Vehicle Manufacturing Program of the department, which provides loans to support American manufacturing of light vehicles. , parts and other materials that improve fuel economy.

The terms of the government loan have not yet been disclosed; GM previously announced that the Ohio plant was a $2 billion investment, which was to be financed internally. While battery technology is currently the strongest in China, South Korea and Japan, Energy Secretary Jennifer Granholm, former Governor of Michigan, said, “As electric cars and trucks continue to gaining popularity in the United States and around the world, we must seize the chance to manufacture advanced batteries – the heart of this growing industry – right here at home. »

On July 28, GM announced that it was pricing two sets of senior unsecured fixed rate notes totaling $2.25 billion. The so-called “green bonds” include $1 billion of 5.40% notes due 2029 and $1.25 billion of 5.60% notes due 2032. They are designed to help achieve the goals GM’s environmental, social and governance (ESG) standards, including carbon neutral operations by 2040.

GM’s capital spending hit $2.1 billion in the quarter, up from $1.5 billion a year earlier. With automotive net cash from operating activities falling to $3.5 billion for the quarter from $4 billion a year ago, automotive adjusted free cash flow fell to $1.4 billion of dollars against 2.5 billion dollars. In other words, on a quarterly basis, GM’s capital expenditures rose 40% year-on-year, while adjusted free cash flow fell 44%, paving the way for additional debt.

Given rising interest rates, GM’s move to secure debt before it gets more expensive could prove prudent. As Barra noted on the earnings call:

“While demand remains strong, there are certainly growing concerns about the economy. That is why we are already taking proactive steps to manage costs and cash flow, including reducing some discretionary spending and limiting the hiring for critical needs and positions that support growth.

Barra is cautious. While the supply of semiconductors and other parts may improve in the second half, the economy has shown signs of recession and could weaken further as the Federal Reserve tightens credit to stem inflation. Political uncertainty is also growing, with federal money for electric vehicle consumer incentives and charging infrastructure looking less generous after the wreckage of the Democrats’ Build Back Better spending program.

The lesson from GM’s 2009 bankruptcy is that excessive debt can sink any company, even (or especially) a juggernaut with a legendary name and reputation. If Barra and his contemporaries learned anything, they certainly discovered that maintaining a strong balance sheet and credit rating are essential survival tactics for any business – and they went out of their way to let investors know that they got the message.

GM’s strategy relies on sufficient cash flow from internal combustion engine (ICE) vehicles — primarily the Silverado pickup — to support massive investment in BEVs, autonomous technology and fuel cells. As the transition takes place over the next decade, GM expects revenue and cash flow from electrified products such as the Silverado EV, Blazer EV and Cadillac Lyriq to replace those produced by current products.

The risk for investors in GM common is that the reckless borrowing habits of the past will return, burdening GM with debt, damaging its credit rating and leaving it vulnerable to unforeseen catastrophes such as the global financial crisis. The timeline for widespread acceptance of BEVs remains murky – it’s still unclear how soon average consumers will trade in their ICE vehicles for plug-ins.

GM shares continue to sell for more or less the same $33 a share they did when they went public in 2010. With tight cash, GM can ill afford to pay a dividend. (Intercity rival Ford Motor Co. (F) reinstated its dividend and raised it to its pre-COVID rate.)

GM, in this writer’s opinion, remains a HOLD. Owners of GM stock don’t face significant downside risk at the current price in the 1930s. company investment in BEV and other advanced technologies.

GM bonds barely qualify as investment grade. Credit rating agencies will be watching GM closely, so investors should pay attention to raters for any evidence of balance sheet weakening.