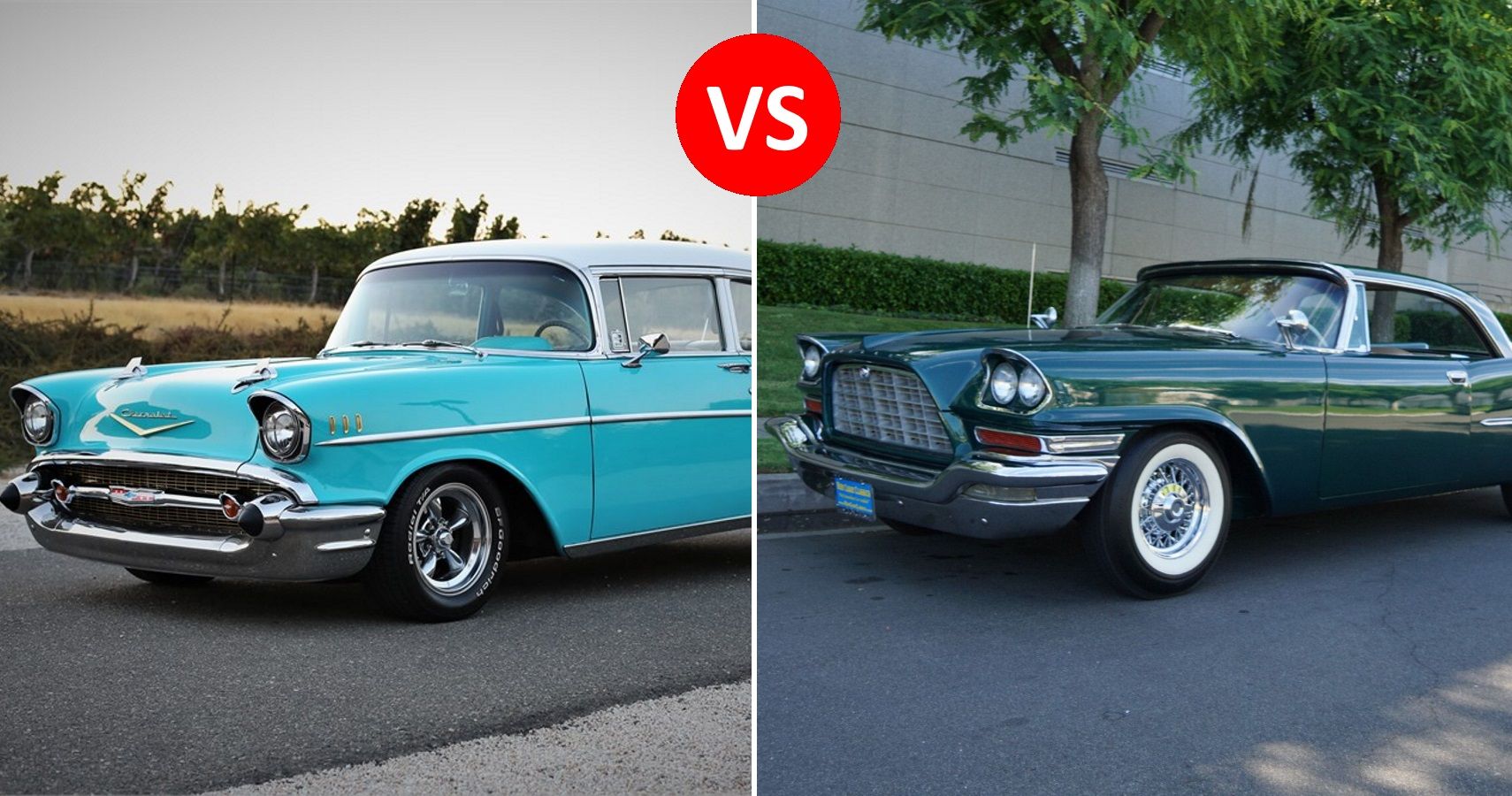 The mention of “classic cars” often refers to vehicles like a ’57 Chevrolet. It is as iconic a vehicle as it gets. But are there other vintage rides that can take on the Chevrolet? Read on, as this edition of Auction Dilemma explores a match between a 1957 Chevrolet Bel Air on autohunter.com and a 1957 Chrysler 300C on hemmings.com.

The second generation Bel Air was short lived (1955-1957), but this was at a time when automakers made substantial changes to models every year to stay competitive. As such, the ’57 Bel Air featured a more elaborate front end and exaggerated rear spoilers that set this model year apart from its predecessors.

This tropical turquoise and white example shows off yards of chrome that are the epitome of the Chevy ’57 look. And the aftermarket wheels and slender profile give it a ‘go fast’ look. The seller reports a few flaws, but otherwise the exterior looks clean.

This classic is powered by a rebuilt 283 cubic inch V8 that featured fuel injection when it debuted in 1957 (a four-barrel Holley carburetor has since been installed). The original power was rated at 283 horsepower. The engine was also an upgrade for the Bel Air. A four-speed Muncie manual transmission controls the rear wheels.

Inside, this Bel Air gets a restoration treatment with an aftermarket steering wheel, Hurst shifter, gray vinyl and cloth upholstery and seat belts. An aftermarket audio system has also been installed in the cabin.

RELATED: These Are The 10 Coolest Chevy Bel Air Models

Chrysler’s approach with the second-generation 300 was not to tackle the Chevy Bel Air directly. The 300 was more of a full-size luxury (although the Bel Air was the top trim for its class of Chevrolet). But, the 1957 300C had one thing in common with the Bel Air of the same year, extravagant fins that are hard to miss. Chrysler’s streamlined front and interior embraced the future while the amplified rear paid homage to excess for one last time.

Refinished in vintage parade green metallic (from the original polar white) during a restoration, this 300C is immaculate and flawless, according to the seller.

Hemi power is as appealing in the 1950s as it is today. In the case of this 300C, it’s a 392 cubic inch V8 that has been factory rated for 375 horsepower using a four-barrel dual-carb setup. A push-button three-speed automatic transmission manages the rear wheels.

The near-perfect exterior is matched with a restored leather interior that looks showroom-worthy and includes factory upgrades like power windows.

Take your pick of extreme drifts

This Chevrolet and Chrysler date back to a time when excess mattered, so take your pick based on how you like your fins. With two days remaining, the 1957 Chevy Bel Air has a current high supply of $ 26,500. The 1957 Chrysler 300C auction ends in ten days and has a best bid of $ 32,000.

Smokey and the Bandit was a huge success, making the Pontiac Trans Am a superstar in the process.

Dave Goldberg has been a lifelong automotive enthusiast and holds a BA in Journalism from George Washington University. As he leans on European wheels for his personal driving, Dave gets excited about everything from Acura to Zagato.

Everything you need to know about the 1967 Chevrolet Camaro