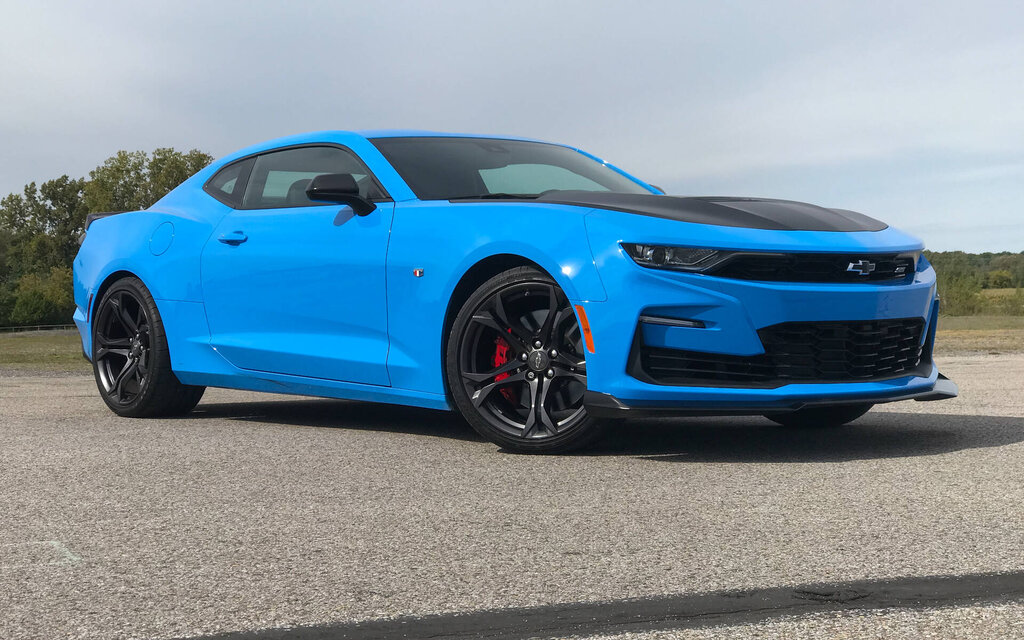 The Chevrolet Camaro is definitely not the easiest car to live with. Killer looks are one thing, but the visibility is just atrocious. At least when you’re talking about the coupe. The Camaro Convertible obviously doesn’t have this problem.

It’s a whole different story when it comes to performance and dynamic driving. The Camaro is one of the best sports cars in any segment. This is especially true with the optional 1LE Track Performance Package ($8,495 money well spent), available on the more powerful SS and ZL1 models.

The naturally aspirated 6.2-liter V8 engine, which develops 455 horsepower, propels the Camaro SS from 0 to 100 km/h in 4.66 seconds and covers the quarter mile in 12.76 seconds (at 184.7 km/h ) with the six-speed manual transmission. gearbox – enough power and speed to have fun on a track. At just over $55,000 in 1SS trim with the 1LE package, the price is also reasonable. And remember that these cars hardly lose any value in today’s market.

Sure, the ZL1 is spectacular with a supercharged 6.2-litre V8 developing 650 horsepower, but it’s also heavier, less efficient and much more expensive at over $82,000, again with the 1LE package included. Additionally, maintenance proves costly and time-consuming as the complexity and demands of the supercharged engine for track use are not to be taken lightly.

A buffet of performance goodies

So what exactly does the 1LE package bring to the mix? The most striking upgrades include a satin black hood wrap, black front splitter, black mirror caps and a black rear spoiler. The 20-inch forged aluminum wheels are also black and wrapped in chunky Goodyear Eagle F1 SuperCar 3 tires (285/30R20 front, 305/30R20 rear). Behind them are powerful Brembo brakes with six-piston calipers and 370mm discs up front and four-piston calipers at the rear.

The stiffer, more responsive suspension makes good use of the latest version of GM’s excellent Magnetic Ride Control damping technology. The electronically locking differential benefits from an additional oil cooler designed for track driving. Ditto for the engine and transmission. Meanwhile, the dual-mode exhaust system lets out a deep growl through four stainless steel tips. All of the above is built on the exceptional Alpha architecture that has underpinned the sixth-generation Camaro since 2016, not to mention the current Cadillac CT4 and CT5.

Recaro sports seats, also part of the 1LE package, provide the perfect blend of comfort and support, while the Alcantara-trimmed steering wheel is just thick enough for a pleasant grip. The center console houses a small shifter with a solid feel and short, precise throws. The shift knob is covered in Alcantara, and the badge at the top is a reminder that Chevy engineers failed to put reverse to the left of first gear.

Paddle shifters on the steering wheel control the transmission’s rev-matching feature, a nifty addition first seen on the C7 Corvette that proves fairly simple to use. The package is completed with a head-up display to support the two large and four small gauges in the instrument cluster.

To make the most of our time with the 2022 Chevrolet Camaro SS 1LE, our best option was the safe and controlled environment of Sanair, a popular highway about 75 minutes west of Montreal.

We happened to be there for a Sanair Track Day, one of 15 such events held during the season. Online registration costs $100 more than two days before the event, otherwise you have to pay $140 for seven sessions of 15 minutes each. Participants are divided into four groups: green (beginners), yellow (intermediate), red (advanced) and black (expert).

On this sunny Saturday, there were all kinds of cars on hand, from a bunch of modified Civics to a few Mazda RX-8s, Honda S2000s and Toyota MR-2 Spyders to a pair of black Camaro SS 1LE models. Also a few Porsche Cayman and Subaru BRZ coupes, several Miatas and a Porsche 911 GT3 lining up behind a Micra Cup and a Tesla Model Y. Heck, we even saw an old Ford Pinto with a 427ci V8 tuned to over 600 horsepower.

The Sanair Track Day program was created by Kévin Leduc when he was only 18 years old. He has been in charge for about ten years now, with the help of relatives and friends. Its focus has always been safety, which is why you’ll find three flaggers at strategic points along the 1.98km track.

On the track at Sanair

The first session in the Camaro had us following Leduc’s heavily modified Civic, just to familiarize ourselves with the car and the track. Even though the big Chevy had twice the power, we resisted the urge to overtake the Civic. Handling was good and predictable despite the huge weight difference between the two cars. We noticed the brake pedal losing a bit of force after two or three laps, but things were back to normal soon after.

Our second outing on the track was solo, pedal to metal, the Camaro hitting nearly 130 mph in fourth gear before having to slam on the brakes. The seemingly endless first corner was easy to navigate in Competition mode, despite the stability control being turned off. Attacking the tightest corners alongside the fast lane was equally fun and rewarding, with the sweet soundtrack of the V8 adding to the experience.

As we discovered yet again, the Camaro SS 1LE has a ton of capability and massive potential on a track. This last test, like the previous ones, unfortunately turned out to be far too short. But guess what? Kévin Leduc is considering an endurance racing program. Sign us up!

GM is targeting the American mass with an all-electric Chevrolet Equinox SUV for $30,000