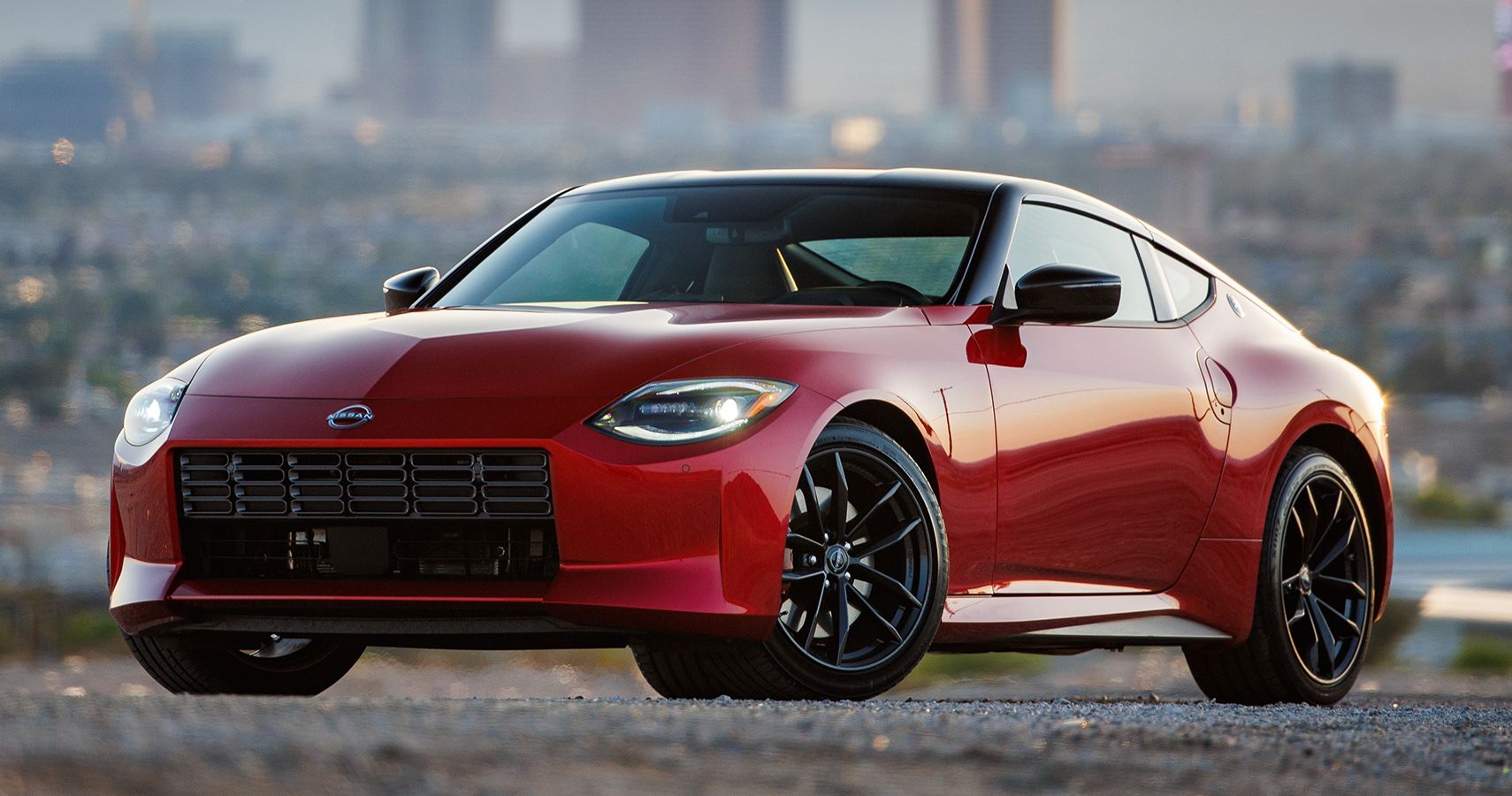 Without a doubt, the world is moving towards electricity at a breakneck pace. Several manufacturers are pledging to stop or drastically reduce the production of petrol and diesel cars and replace them with electric models. This, alongside the competitive nature of the automotive industry and the latest technological advancements, means that there is always something new to see on both the EV and ICE front.

As with other model years, this also leaves plenty of options open for 2023, which can feel overwhelming at times. But it doesn’t have to be that way. That’s why we’ve compiled a list of 10 satisfying and unique 2023 machines that will be top picks for their ability to deliver the perfect blend of comfort, performance, roominess and driving fun. Our list of the top 10 cars worth waiting to get behind the wheel of includes vehicles ranging from Acura to Maserati, Chevy, Mercedes-Benz, BMW and Ferrari. Please read on to learn more.

If there’s one car worth looking forward to with great excitement, it’s the 2023 Acura Integra. Based on the Honda Civic Si, the revived Integra heralds the return of a nameplate iconic in the Acura lineup.

The vehicle, which replaces the ILX, will be powered by a 1.5-liter turbocharged inline-4 developing 200 horsepower and 192 lb-ft of torque mated to a continuously variable transmission with standard front-wheel drive (all-wheel drive does not is not available). Of course, a 6-speed manual transmission is available for enthusiasts.

About six years after the launch of its first generation, the Kia Niro has been redesigned for a new generation of drivers with plenty of technology, more interior space and versatility than ever before, and a premium cabin that delivers a unique and multifaceted luxury.

Inspired by the Haba Niro concept, the second-generation Kia Niro will be powered by a hybrid powertrain consisting of a 1.6-liter four-cylinder and a 32 kW electric motor, developing 139 combined horsepower and 195 lb-ft of combined torque. The 2023 Niro will also feature a plug-in hybrid configuration that includes the same engine as the hybrid model, an 11.1 kWh lithium-ion polymer battery and a 62 kW electric motor for a combined output of 180 horsepower. A six-speed dual-clutch automatic transmission will power both vehicles. Kia Niro will also be available as an all-electric model with an estimated range of 253 miles.

It offers a standard turbocharged 2.0-liter inline-four that generates 256 horsepower and 295 pound-feet of torque. The optional plug-in hybrid configuration combines a 1.3-liter turbocharged four-cylinder engine with a rear-mounted electric motor for a combined output of 272 hp. The base powertrain is linked to a nine-speed automatic transmission, while the plug-in hybrid version has a six-speed automatic and a 15.5kWh lithium-ion battery that’s good for around 30 miles of electric-only range.

Maserati is known in the automotive industry for its consistently inventive design and quality craftsmanship. So far, it looks like the legacy of the 2023 Grecale will be that of a stellar mid-size SUV that fully meets those high standards. Available in GT, Modena and Trofeo trim levels, the base Grecale will be powered by a 2.0-liter turbocharged inline-4 paired with a mild-hybrid system with a belt-start generator and e-Booster to provide a respectable 296 horsepower and 332 lb-ft of torque.

The mid-range Modena model will come with a boosted version of the turbo-four, which boosts output to 325 horsepower. For its part, the top-of-the-line Trofeo will have a more powerful 3.0-liter twin-turbo V6 that develops 523 horsepower and 457 lb-ft of torque. An 8-speed automatic transmission and all-wheel drive are standard.

The 2023 EQE continues an exciting new chapter in Mercedes’ design identity, expanding the brand’s electrified lineup with its dedicated EV chassis. A bold, futuristic sedan, the EQE sits on the same platform as the EQS, albeit a more compact variant, and will be available in EQE 350 and AMG EQE models.

The EQE 350 will have a single rear-mounted motor generating 288 horsepower and 391 lb-ft of torque, while the EQE AMG will use two electric motors, one motor on the rear axle and one in the front. The configuration will produce 617 horsepower (677 hp in the AMG Dynamic Plus) and 701 lb-ft of torque (738 lb-ft in the AMG Dynamic Plus). A 90.6 kWh lithium-ion battery will be used in both vehicles. Ranges for the EQE 350 and EQE AMG are rated at over 300 miles and 250 miles, respectively.

The first SUV in Ferrari’s model lineup, the Purosangue (“thoroughbred” in Italian) will undoubtedly be one of the most sought-after sport utility vehicles to date. It combines breathtaking modernity with the iconic qualities that have made Ferrari so popular among motoring enthusiasts: effortless performance, technological sophistication and aesthetic grace.

Specifications are under wraps at this time, but expect the Purosangue to come with a naturally aspirated V12, standard all-wheel drive, four seats and plenty of features that will allow it to subvert convention and pushing the limits, as Ferrari so often does. .

The 2023 Toyota GR Corolla is designed for fun behind the wheel and displays Toyota Gazoo Racing’s design philosophy down to the smallest detail. To imbue it with improved aerodynamics and ultra-precise handling, Toyota’s performance division outfitted the GR Corolla with functional air vents, a sportier suspension and enchanting design lines that gracefully cut through the air. In terms of dimension, the Corolla GR is 2.5 inches wider and 1.5 inches longer than the Corolla hatchback; the wheelbase is unchanged at 103.9 inches.

Under the hood of the hot race-focused sedan is a 1.3-liter 3-cylinder turbocharged engine with 300 horsepower and 273 lb-ft. of torque. A six-speed manual transmission with rev-matching function and GR-FOUR all-wheel drive is standard.

Nissan paved the way for a future in racing with its iconic Z cars in the 70s, and once again solidifies its road racing pedigree for 2023 with the redesigned Z hardtop coupe.

It gets a 3.0-liter twin-turbo V6 developing 400 horsepower and 350 lb-ft of torque. The powertrain can be mated to a six-speed manual or a nine-speed automatic with paddle shifters on the steering wheel.

BMW vehicles have never been child’s play, but the all-new XM, with its exceptionally futuristic, sharply defined lines and bold character, is a rugged SUV designed to be much more: the most powerful production BMW ever. never designed.

Under the hood, a powerful 4.4-liter twin-turbo V8 mated to an electric motor and battery will be offered with 644 horsepower and an estimated 30-mile electric-only range. Additionally, the XM will use a coil-over suspension system with adaptive dampers and active anti-roll bars to help control body roll in tight corners.

The new 2023 Corvette Z06 is a sports car like no other. A shining example that rewrites the rules of the game and elevates Chevrolet to the rank of manufacturers of exotic cars and supercars like Ferrari and Lamborghini.

For this latest update, Chevy engineers focused on elevating the Corvette’s status to that of a true mid-engine supercar, marking a departure from the usual front-engine layout of previous Corvette models. To achieve this, engineers changed the suspension design and fitted the Corvette with new wheels, six-piston Brembo front brakes and a naturally aspirated 5.5-liter DOHC V8 with a flat-plane crankshaft. This new powertrain delivers an astonishing 670 horsepower and 460 lb-ft of torque, which is more than enough to deliver the raw excitement of a hardcore, powerful, track-focused supercar.